Vår are a Danish band featuring members of Ice Age and Sexdrome. Elias (Ice Age) and Loke (Sexdrome/Damien Dubrovnik) began Vår recording songs during breaks at school. On Wednesday, June 13, Vår made a “secret” live US debut as a [newly] full band. The boys flew in from Copenhagen just a few days before their show and locked themselves in the recording studio at Heaven Street Records to write and prepare for their live shows (as the full band had only played together a few times). Next week, they will begin to record their full-length LP, which will be released on Sacred Bones Records sometime later this year.

I caught a voyeuristic thrill witnessing Vår live. The boys were utterly submerged in their music and each other, embracing each other tenderly or confronting the audience together. These four young men from copenhagen posses a captivating force that often lacks in typical “Lo-Fi” “minimal snyth” outfits. The set seamlessly vacillated from harsher noise landscapes to sweet, soft ballads to danceable songs with industrial nods. If you are in New York Sunday, June 17, I would urge you to catch them live at the Glasslands Gallery.

I had a chance to speak with the boys after their performance at Wierd night (a weekly party at Home Sweet Home).

JANE PAIN: Vår began recording songs during breaks at school.  Was this band only intended to be a recording project?

Loke: That’s it. We never had a rehearsal, even for the recordings, so it is very much a recording project.

JP: So was tonight your first live show?

L: No, we played two shows before, but it was years ago and it was quite different from this one.

JP: Does it feel weird to play in front of a live audience?

Elias: It was as it was supposed to [be]. It’s all pretty intuitive.

JP: Is there a direct noise influence to the project?

L: I have had and still have quite a few noise projects. I do a solo project and I am part of a duo called Damien Dubrovnik.

JP: How do you feel that your other projects are similar or dissimilar to Vår?

L: I think there is a connection in the energy. It’s quite different, because I do not consider Vår to be a noise project at all. But in aesthetics and energy, I think it is very similar.

E: I don’t think it is that similar to any of the other projects that I have. I think it is more about the relationship that me and Loke have. An extension of that.

L: It’s more like the sound of hanging out.

JP: It comes across when you guys are playing.

Chris Hansell: Can you talk about Posh Isolation [Loke’s noise label] a bit?

L: It is about us. Thriving towards some moment that is yet to be seen. It is about energy. I don’t consider it a record label, really. It is what we do and it is towards… An aesthetical energy that seems fitting for living. It’s my life and blood.

Lukas: We haven’t seen much of America. This is my first time in America and mostly I have just seen the inside of a recording studio. So I don’t know. I have not signed any autographs yet.

CH: Can you talk about the video for “in my arms”? The stripper is your friend, right?

E: It is my childhood friend that taught me how to drink alcohol and smoke hash when I was a kid. We used to go to the CD store close to where we live. He was a few years older. Both of us would buy five CDs each and hand them off to each other after we had listened to them. That is how I became interested in music.

L: We met him a half a year ago and he lives in Peru now, as a male stripper. He seemed like the embodiment of the energy that we want to capture with Vår. It felt like an obvious thing to shoot some stuff with him and to use it in the video. The plan is there will be a lot more stuff with him in the future.

JP: What is this specific energy that you are going for?

E: what we found interesting with him is a combination of self-satisfaction and a being with a drawing aura.

L: To answer your question, HE is the energy that we are trying to capture. 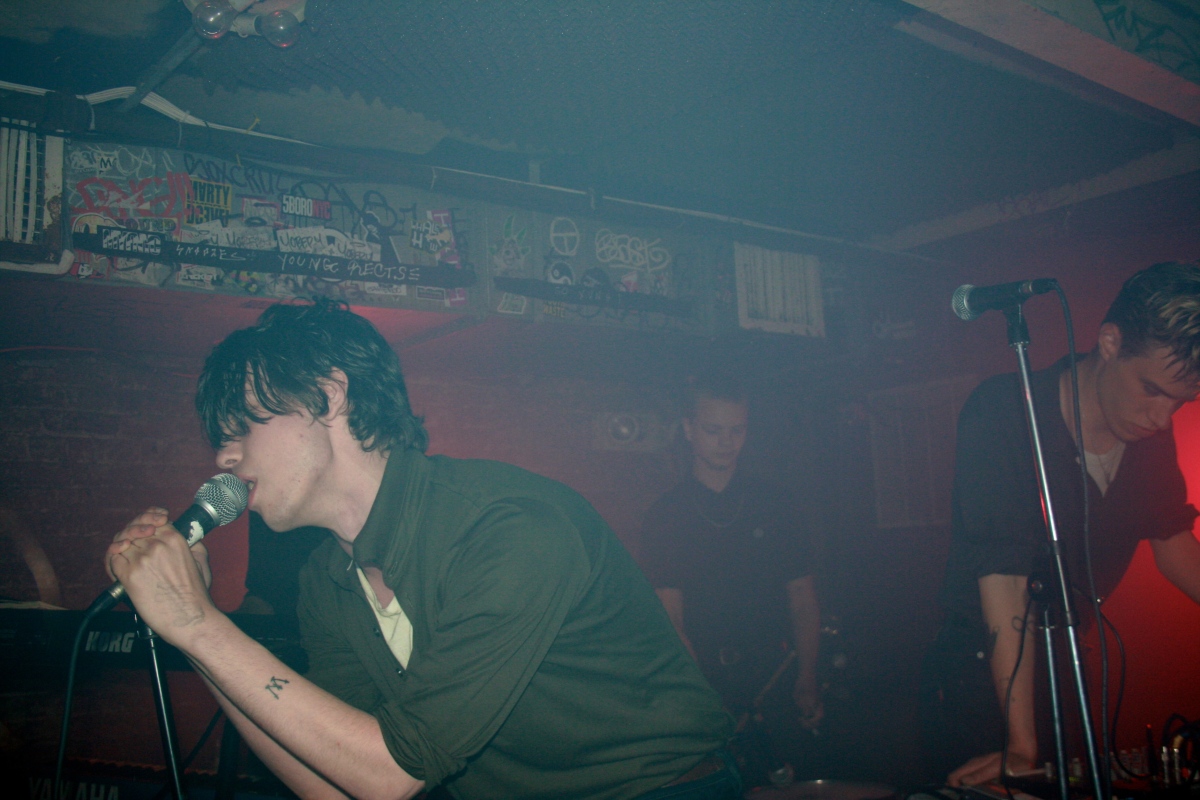 CH: What New York bands and projects are you into?

E: I like a lot of new punk stuff like Nomad and Perdition and Crazy Spirit. It is nice to see something in New York that seems dangerous again.

CH: Have you heard the Hankwood and the Hammerheads LP yet?

E: Yes, that is another good one.

CH: How about New York noise?

E: I hear names around, Sean from Heaven Street. Cult of Youth. You can tell it is very heartfelt from his side, the way that he thinks is very impressive. Elias friends from Scandinavia tell us that the Redlight district is the whole thing.  That is something I am excited to see, even if there isn’t a show, I want to see the place and meet the people.

L: When people talk about it [Redlight] seems kind of similar to Copenhagen in a way. There is an actual scene, and people care to work together. It is difficult to talk about because I have never been there.

JP: A few people who work together. There are so many projects coming from just a few people.

L: In a sense, maybe there are twenty-five people in Copenhagen, but we are all in each other’s projects. All the noise projects and punk projects have studios in the same building.

E: It is very close knit.

CH: What are some Copenhagen bands that Americans should check out?

E: All of the bands.

Vår will be performing the Sacred Bones Showcase during Northside festival at Glasslands June 17 alongside Crystal Stilts, Amen Dunes, Warthog and more. Tickets are on sale now.