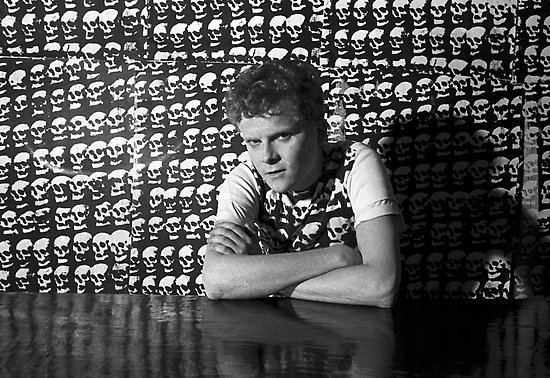 Medical Records have reissued two classic albums from Australian Industrial legends Severed Heads. First released on UK label Ink Records, Since The Accident (1983) and Slab City Horror (1985) are two of the most beloved records of Severed Head’s massive 30 year career. Lovingly re-mastered by the group’s front man, Tom Ellard from the original source masters, both titles are limited to 1000 copies and are available now for pre-order.

Severed Heads are revered as visionaries in the underground minimal electronics scene. Songs like “Dead Eyes Opened” and “We Have Come To Bless This House” remain staples at any dark dance night. I had the honor to correspond with Tom Ellard via e-mail about the early days of making electronic music in Australia, how he views the modern minimal electronic scene and how he would like Severed Heads to be remembered.

How did you personally begin experimenting with alternative methods of making music, such as the use of tape loops?

Tape was just the mainstream medium. If you weren’t interested in guitars or paying a bucket of money for a synthesizer, you’d at least have a cassette recorder. An open reel machine was cheap, every pawnshop had plenty. And tape explains itself, it’s a straight line, you can cut it or put it in a circle.

The avant-garde had been crossing into the mainstream for years—we all knew the Beatles et al. In the mid 70’s you had FM radio starting up, playing Reich and Stockhausen, and Brian Eno was making records where he’d show you how to wire tape machines to make echoes. Really you would have to close your ears to not be trying these ideas on the crap equipment you had available; I guess we weren’t able to ‘progress’ past that for a while.

When I finally did manage to own a synthesizer it was barely musical. It did screeches better than notes. It was harder to be normal than not.

Were there other Aussie groups influencing your process of making music or did you arrive to most of your methods on your own?

Not in the mid late 70s, there had been a strong glam scene, it was fading, and there were some Detroit style rock bands. We learned mostly from imported records and the radio, plus a few people we knew like SPK. Australia was pretty isolated at the time. By ’79 there was a gaggle of people that had very quickly skipped over punk and went for something more DIY, because we already had to be DIY. People wouldn’t make the same kind of sound but the community was small enough for camaraderie.

Australian bands picked up keyboards quicker then most places, I think. We have an odd European quality to our society. For some reason ABBA was huge—the Eurovision Song Contest is still big news. DEVO have always done well here. So synthesizer bands weren’t too strange to that period.

How did you end up hooking up with Richard Fielding and Andrew Wright / Mr. And Mrs. No Smoking Sign? When did you decide to work together and become Severed Heads?

Richard was the only guy at school that listened to the same weird shit as I did. Richard and Andrew were already working together, I was younger and dropped in to see what they were doing, then joined in. It wasn’t really a band; it was a bunch of school kids making noise, which was great because I’d had to make the noise by myself up to that point. Truth in advertising—we used a horrible band name to frighten people off.

Why did Fielding and Wright leave Severed Heads? Why did you decide to carry on Severed Heads without them, collaborating with other artists?

Andrew wanted to get on with life and so Richard and I were left with the ‘band’. He decided to prank a local radio show by sending in an ‘industrial’ band tape and we chose Severed Heads as a completely obvious parody name that everyone then took seriously.

Honestly, it was the dumbest thing we could agree on. After a while Richard decided that a band was ‘too rockist’ and became a roadie for a bunch of tape recorders called ‘The Nobodies’.

I just accepted that hey, OK, people think this is real so may as well make something of it. Kind of like Spinal Tap became a real band. And I wanted to try be halfway decent, make the sounds that I actually needed to hear.

How much of a surprise was it to you to have a dance floor hits, when you also have appeal as a very experimental and industrial influenced project? Were you working towards that all along?

No, electronic music wasn’t always dance music. Disco was actually played live. Kraftwerk played dub and funk. Around 1977-78 you started to get some harsh rhythmic music.“Warm Leatherette” by The Normal was quite inspirational. It was hard and hateful, but kind of sexual. Suicide made “Dream Baby Dream”. Telex popped out “Moskow Diskow” probably by accident. Richard and I liked dub, some disco, mostly the machine twitchiness of it. The band has always been about sounds we need to be happy. Sometimes other people were in the same moment, and we would be popular. Most of the time we’d be completely disconnected from the fashion of the moment and people gave us shit for being ‘not industrial enough’ or ‘not danceable enough’ or whatever.

It’s a pleasure to make pop music, but it’s just as much fun to rip it into shreds.

What do you think of the state of modern industrial, noise, and dark dance music? Are there any bands that you think are doing it right?

Well I can’t help but read that as a bunch of genres that sound a bit like ‘romantic comedy western’. And keep in mind we started as skeptics. It being 2014 I am more keen to hear what people are doing that transcends these old silos. Severed Heads kept lurching from one pole to the other led by whim and irritation, and I would hope that any band would share that same flexibility.

I’m exploring music backwards just as much as forward, right now I’m learning about ‘sampling’ in classical music where they would organize the orchestra to reproduce natural sounds (Haydn is notorious for being too heavy on sampling). Working forward I’m hearing some good stuff coming out of the net labels, although it can be a bit throwaway at times. Probably the most successful music of recent times for me are the people that came out the other side of glitch with their pants on – Monolake, Mouse On Mars, Pimmon, Markus Guentner… any names I try list will simply neglect someone… but they kept their humanity through the austerity.

Are you bothered by people rehashing genres of music that Severed Heads helped pioneer, or is it flattering? Both?

But they rehash some tiny corner of what we once did over 30 years, and often not understanding the humor in it. It’s all very flat and limited, like trying to reproduce a single ‘cool’ photograph of James Dean. Like I said before, it’s change that matters, not matching a single aspect of something. Maybe it’s hard to be different now that every aspect of the music scene has been ‘pre-movemented’, but hell, it was never important to have to explain everything to everyone.

I get along better with people that don’t rehash but share the impetus.

You do feel like you take the project more seriously in retrospect? Was it never your primary focus?

It’s possible to actively and creatively not take something too seriously. Look at Kraftwerk, who have been rendered into an inert statue by being ‘serious’. They have been left with an extremely limited palette, which they re-work over and over and it’s not surprising that their latest venture is 3D. You will always get what you expect from Kraftwerk, which is good marketing but more than a little dull.

Are you excited for the reissues? What do they mean to you personally?

OK, now this is a complex issue. Obviously it is better to be recalled than to be forgotten. But then again, selective memory re-writes the truth. The recall covers a short period of the band’s life and one where we related to the fashions of the time. It conceals a more complex history, where we would slip out of view, ignored, to work on ideas that might only became fashionable years later. The more experimental we were, the less reliable the results, the less people are interested now. And I think it needs to be said clearly that the records that people recall are mostly the ones where we had major label distribution. But, if we are entertainers we have a responsibility to the listeners, and to allow the labels to exercise their own curatorial logic. Maybe the history is a source to be remixed. Music prompts memory, it might not control it.

I don’t want to push your buttons at all, but don’t you feel that it is expected that a label would want to reissue the more mainstream releases that you are best known for as opposed to the tracks with “less reliable results”?

Sure, that is expected. It has happened a few times now. It’s a good thing which then asks, well what else could we do? What is this curtain that closes in the mid 1980s?

Because Severed Heads had such a massive career, it would be difficult for any label to reissue it all. In your perfect dream, would you like to have a complete box set?

Nah, that’s probably best dealt with by Bandcamp. I am making new things that I will package up somehow, maybe they will be valuable in 2034.

What other sorts of projects, obsessions and hobbies do you have apart from making music?

There’s not too much time for everything I’d want to do these days, as I’m full time in teaching/administration at a university. But here’s a list of recent things.

Severed Heads’ City Slab Horror LP and Since The Accident LP reissues are out now on Medical Records.