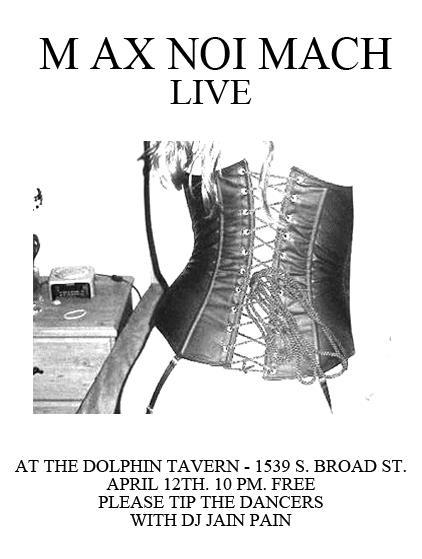 I was thrilled when I was asked to Dj a M ax Noi mach show at the Dolphin tavern. Not only am I a fan of M ax Noi Mach, but I am also a big fan of the Dolphin. For those of you who are not familar with the Dolphin tavern, I’m sorry for you. It is a perfect Lynchian strip club/pool hall in Philadelphia. You can smoke inside, still, of course. The dancers tend to be, you know… As legend has it, there used to be a one armed stripper there, is all I can say. There are no lap dances, so you don’t have to deal with the whole “tip my tits” thing and can just casually stuff dollars whenever without being thanked or acknowledged.

The show was great, but the dancers didn’t show up. I would have been disappointed, as I came from New York for the gig, but some … Nice lady… took it upon herself to provide some serious unprompted on stage entertainment. She poured a beer in her gatoraide, hiked her skirt to her tits and shook her lumpy ass for our benefit. She flipped everyone off, screamed a whole lot, spilled shit all over the place and threw dollar bills all over M ax Noi mach’s gear while he was playing. At one point, she turned to me and shared: “TEN OF MY FRIENDS DIED THIS YEAR THIS WOULD BE A GOOD TIME TO DIE!”

She had a point but you had to be there, I guess. She was so perfect that I assumed that M ax Noi Mach had hired her. He hadn’t.

Out of nowhere, this Japanese punk band shows up with a guitar, a bass and a singular drum. They were milling around on stage alot. Eventually they plugged in and noodled and or “sound checked” for about twenty minutes while every person who came for the show asked me what was going on (I didn’t know… the organizers didn’t know) and everyone who was just there looked like they had enough of all of the foolishness. They were just trying to play pool, and we were in the way. Finally, this mystery Japanese punk band just started playing a Ramones cover and the rest is Dolphin history. May the legend live on with that one armed stripper in Philly folk lore for generations.